Introduction : In Etah area under groundnut cultivation is about 2000 ha. Farmers were facing problems in decorticating of ground nut because at the time of sowing of ground nut large amount of ground nut is required to be decorticated. The farmers of local region had no option of preparing seeds except to break the groundnut pod by pressing it by hand fingers which is really very tedious, time taking and whole family members’ engagement work. A farmer who planned to grow groundnut crops in large area was compelled to prepare groundnut seeds, needs weeks together. To make this work easy Groundnut decorticators have been evaluated over farmers practice.

Output : In inclined opening grain damage was 2% however in horizontal opening it was 7% and in farmers’ practice ( pressing of pod by hand) it was 0.5%. Decorticating capacity has been increased up to567% over farmers’ practice.


Performance of Groundnut Decorticators for separation of groundnut kernels from pods over farmers’ practice. 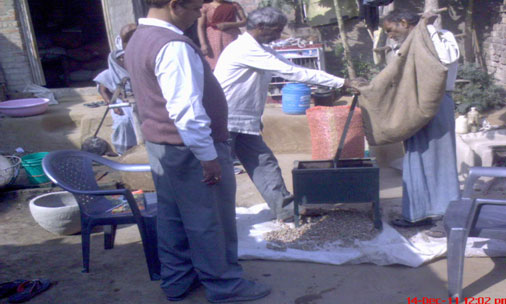 Buffaloes are main source of milk production in the Etah district but mortality in buffalo calves is the major problem of animal keepers (table -1). It was found during the visit of villages that about 70% buffalo calves die from birth to one year of age. This matter was discussed with farmers and mostly farmers told that the mortality is due to the cold and pneumonia as buffaloes are calved during winter. Some farmers also told that round worms are also appeared in the dung of calves. So the KVK scientist facilitated farmers that the death of calves is due to worms which effect the calf health and ultimately calf body resistance to disease is decreased. So calf easily suffers from cold and pneumonia. Hence root cause of calf's mortality is worm infestation. It is also observed that after the death of calf milk production is decreased/effected for a week because animal is not easily let down the milk and takes more time to give the milk. For deworming of calf farmers are used butter milk and salt only when round worms appeared in faeces which is not much effective.

It is clear from the table-1 that buffaloes are the main source of milk in the district as its population is about 60% of total milch animals.

KVK, Awagarh has been given emphasis for the control of mortality of buffalo calves. In this direction training and FLD have been launched during 2000-2008 a total of 397 farmers were given training on dairy cattle management and adoption of deworming practices remained 72%. In the FLD programme 716 demonstration on deworming with 573 farmers of 11 adopted villages Onera, Barai Kalyanpur, Narau Virnagar, Virnagar, Nusratpur, Harchandpur, Ganekshpur, Mudai Prahladnagar, Sarai Rajnagar,Bhoorgaddah were conducted.